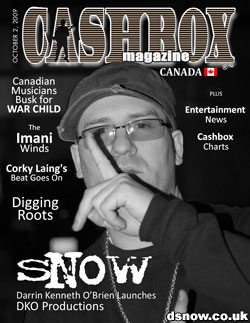 A “Rocky Story” of a young upstart Irish boy growing up in the projects; going to jail for a crime he didn’t commit but ending up as the #1 reggae singer and artist in the world.

Cashbox had the opportunity to “Shovel the Snow” with Darrin Kenneth O’Brien on this exclusive Q and A.

Cashbox: When you say the name Snow in the musical circles, so many different stories. almost urban legends surface, one of course being how you became Snow and when you wrote the song “Informer”.
The most popular story being that while you were incarcerated you learned the Jamaican slang patois and wrote the song “Informer”. What music were you listening to before that time?

Snow: No, that’s not quite right, I didn’t learn reggae in jail, and I had always been into the music in my ‘hood as my neighbours were from Jamaica and they were always playing reggae music. When I was like 11 years old and my brother was 14, he used to put on Kiss concerts and he had a hook-up with a ticket agency already at that age. So he would get blank tickets and write on them Kiss concert with like Max Webster opening up. Our nanny made us the costumes with all the makeup and I had long hair and the blood, the whole thing and we had like 120 people show up. We had a stage and everything; it was amazing.
We liked rock ‘n’ roll then and in those days everyone in the projects (where I lived Allenbury Gardens) were Irish, the ‘hood was all Irish families. We listened to Kiss, Rush, Max Webster and had a lot of fun doing these shows. Then when I was around 14 years old and Pierre Trudeau was the Prime Minister, he changed the immigration policies and that’s when all the Chinese came in and in my neighbourhood, the Jamaicans.