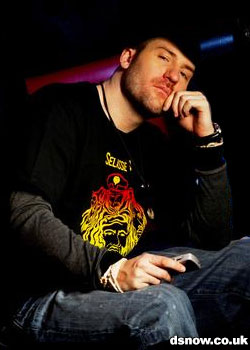 Snow was born Darrin O’Brien on the 30th October 1969 in Toronto, Canada. He grew up in the predominantly Irish neighbourhood of Allenbury Gardens, a projects in North York.

As a child, Snow was a fan of rock n’ roll. Listening to such artists as Kiss, Rush, and Max Webster, Snow and his then 14 year old brother used to put on rock shows, imitating their favourite bands with costumes made for them by their nanny.

When Canadian Prime Minister Pierre Trudeau changed the immigration policies around 1983, that’s when the Jamaicans started to move into the area. One family in particular, the Browns, moved in next door and started playing reggae music all of the time.

Snow took an interest in reggae music and started listening to scratchy dub tapes and reggae artists such as Tenor Saw and Nitty Gritty. “I used to get tapes that were dubbed over like 50 times before they came to me. I’d listen and i’d hear a word and rewind it and that’s all i’d do,” he remembers.

Soon he had mastered the Jamaican patois and the miles-per-minute wordmatology of toasting the mic. He also mastered being a inebriated menace to society and was given two charges for attemped murder after a incident outside of a North York pub. He was locked up in the Metro East Detention Centre where he served time before being bailed by his mother.

It didn’t end there though. In a seperate incident, Snow was charged with assault causing bodily harm for which he pleaded guilty and ended up also serving time in Maplehurst Correctional Centre. He was later aquitted of all murder charges after a friend confessed to the stabbing.

“I should be saying that I regret going to jail but I can’t,” he says. “I wrote Informer and got the confidence singing in jail in front of murderers. Eighteen years old and i’m on a range with pure murderers. I’m not on no petty range downstairs, or the third floor, or the fourth floor. I’m on the fifth floor with big timers rocking the jailhouse!”

While on bail, (between incarcerations), Snow took a trip to New York City where word got back to MC Shan that this young white suburbanite from Canada could sing reggae, but Shan wasn’t too convinced … until he met Snow.

“What happened is this guy comes walking along with his little circular glasses, like he always has.” says Shan. “He opened his mouth and starts singing Informer, Lady with the Red Dress, and I like totally dropped my chin was hanging down by my sneakers! Next day I’m like, come to my house, we gotta to start working right away!”

Snow finished recording the album, got a deal with East/West/Warner Bros., made a video to the first single Informer and then returned to Canada to serve at the Maplehurst Correctional Centre. It was here where Snow saw the video to Informer played on TV for the first time.

After eight months of lockdown, he was released, and so was his debut album, 12 Inches of Snow. Informer went straight to number one on the Billboard Singles Chart in 1993, and stayed there for a impressive seven weeks. It is also entered into the Guiness Book of World Records, twice, as the biggest selling reggae single in U.S. history, and the highest charting reggae single in history.

And it doesn’t end there, Girl, I’ve been hurt (also from 12 Inches of Snow) peaked at number 20 on the Billboard Chart, and the album went triple-platinum in both Canada and the United States. Sexy Girl, from Snow’s 1995 album titled Murder Love, charted at number one in fifteen different countries, and Anything for You became such a massive hit in Jamaica, where the record was made, that it is now considered anthemic.

He’s even tried his hand at acting. His first role was playing the head of a crack house in Tight: The Motion Picture, a Canadian independent production shot in Vancouver, and playing a prison guard in Robert DeNiro’s directorial feature, Prison Song. Which also stars Q-Tip, Mary J. Blige, Harold Perrineau, Elvis Costello and Fat Joe. He’s also worked with some of the biggest producers out there, including Tony and Dave Kelly (Beenie Man, Sean Paul) and Michael Tucker (NSync, Backstreet Boys).

In 2009 Snow’s long time partner and mother of his daughter Tamei Edberg sadly passed away from cancer. Snow took time out of making music and the limelight as a whole to come to terms with the loss. He organized a charity fundraiser which helped raise $15,000 for cancer, and also started Pure Snow NGO, a organization which helps people living in non-profit housing. He holds benefit concerts and makes charitable appearances to hand out supplies like backpacks full of school supplies to children living in public housing.

The past couple of years have been quiet in the Snow camp. In 2010 there was a couple of collaboration releases, Long Time with Chach and Peace with Elephant Man, and in 2011 Sweet Sound with Tosh. There have also been a couple of internet releases, Fallin’ Bredjen and In My Shoes, but nothing official.

2013 seen Snow return to the big screen, playing himself in a Canadian motion picture called The Movie Out Here. He also grabbed some headlines after Marissa Mayer, the CEO of Yahoo, complained that the company’s hold music was “garbage”, so Snow teamed up with Jingle Punks to record some hold music which went viral online.

In 2014 Snow reappeared on the music scene by releasing a collaboration single with reggae legend Mykal Rose. Released by Bugatti Music Entertainment, who now manage Snow’s career, the song titled ‘Shame’ has been well received by fans and many in the music industry. Snow also announced on his Twitter and Instagram that 100% of the proceeds from the single ‘Shame’ would be donated to the U.S. -based Karen E. Mumford Cancer Foundation (KEM) in honour of his late wife, Tamei.

In July of 2015, Snow released ‘Hands Up’ on SoundCloud after posting on Twitter that he was about to release new material. This was a remix of a previously unreleased track of the same name. The new remix, which was recorded in Jamaica features the legendary Reggae Band Mystic Revealers. Snow also announced on social media that the song Fallin’ (Fallin’ Bredjen) will be getting an official release. The song first appeared on the internet back in 2009, whether is was leaked or officially released in this way remains unknown. The wait may finally be coming to an end for Snow fans waiting on a new album.