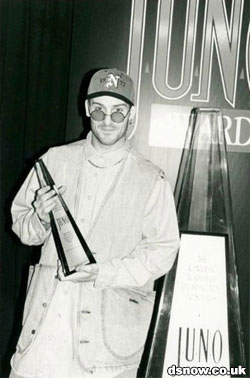 He was also nominated for ‘Album of the Year’ for 12 Inches of Snow and ‘Male Vocalist of the Year’.

Informer went straight to the top of the Billboard Hot 100 Singles chart in 1993, and stayed there for an impressive seven weeks.

The record went Platinum in both the United States and Germany, Gold in Austria and Silver in the United Kingdom.

At first, Steve Salem suspected it was a snow job.

How could some guy from Toronto – and a white guy at that – authentically reproduce the rapid-fire patois of Jamaican dancehall music, let alone sell a ton of records?

That question ran through Salem’s mind when producer MC Shan brought Snow to a New York studio for an audition. With DJ Marvin Prince laying down a beat track, Snow grabbed the microphone and chilled the room with Uhh in You.

Salem, co-owner of Motor Jam Records, went from skeptic to believer in three minutes and 46 seconds.

That’s the length of time listed on the CD jacket for Uhh in You, one of 14 tracks on 12 Inches of Snow, Snow’s debut disc released last December. Twelve Inches has sold more than 2 million copies worldwide, based mainly on the strength of one single, Informer.

“Sure I was skeptical,” Salem said this week from his New York office. “Well, you know what it’s like. There’s always somebody trying to get a record deal.”

END_OF_DOCUMENT_TOKEN_TO_BE_REPLACED

Sure, white guys can rap. But no way can a skinny, can’t-dance Canadian who has never even seen the Caribbean master Jamaican toasting, a reggae-flavored rap style delivered in singsong patois at auctioneer speed.

Better make that Snow way. Born in Toronto, Snow, 23, has established himself as rasta rap’s gab-gifted savant with “Informer,” the catchy single that reigned at No. 1 on Billboard’s Hot 100 for seven weeks. Though its lyrics are delivered at such bewildering speed that the video carries subtitles, the radio-ubiquitous song has pushed the debut album that spawned it, 12 Inches of Snow, into the Top 5.

Snow (real name: Darrin Kenneth O’Brien) learned the rap style from neighbors in the mostly Jamaican housing project where he grew up, the second of four children born to a cabdriver father and a homemaker mother.

A ninth-grade dropout (“I didn’t know how to read that well; still don’t”), he graduated to the slammer after a string of arrests for street brawling. In the projects, violence became routine, Snow says. “I would just chill out, drink, whatever. People would walk by, we’d get all drunk and beat ’em. Tempers, I guess.”

END_OF_DOCUMENT_TOKEN_TO_BE_REPLACED

With “Informer,” white Canadian artist Snow has managed to put a dancehall-derived tune sung in Jamaican patois in the No. 1 position on the Hot 100 Singles chart for seven weeks. In addition, the single (which features a rap by M.C. Shan) has become an international hit, reaching No. 3 on the U.K. chart.

For EastWest, the artist’s label, the current task is to keep the momentum going. “Now the challenge of establishing Snow as an artist really confronts us,” says Sylvia Rhone, CEO/chairman of EastWest Records. “When you have that phenomenal single that a lot of people can say is a novelty, we have to prove it’s not a one-trick pony.”

To that end, EastWest plans to expand on Snow’s urban base with the loping hip-hop ballad “Girl, I’ve Been Hurt,” to be released April 26. The label is targeting the R&B/hip-hop audience in an effort to stabilize Snow’s street credibility. To further that goal, the new single includes an extended “bogle” mix by Jamaican superproducers Sly Dunbar &; Robbie Shakespeare.

END_OF_DOCUMENT_TOKEN_TO_BE_REPLACED

Life according to Snow: “I don’t have to be nothing I don’t want to be.”

And who is Snow? A white, Irish, Canadian-born, 23-year-old dance hall rapper who’s responsible for Informer, the No. 1 single on the Billboard charts for the past three weeks.

Being white in a black-dominated rap world is no problem, he says. “Nobody’s dissed me yet.”

“I haven’t talked to him,” he says. “He did his thing … People just killed him.”

“If they do, that’s what’s going to come. I’ll keep putting out good music so they can’t kill me.”

Informer’s popularity speaks for itself. It doesn’t seem to matter that the lyrics are incomprehensible because of Snow’s rapid-fire Jamaican patois – in what is reggae’s answer to rap. (The video, he points out, has the words typed out across the bottom.)